So… there’s Peter Pan, the boy who won’t grow up (lucky kid). Well, like all kids he loses stuff. Only this kid loses his shadow. (How do you even do that?)

Yep, The Pan loses his shadow in a sock drawer in the bedroom of these three kids. (It gets better.) With TINK’S help, The Pan breaks into the bedroom, grabs his shadow, and… then he can’t figure out how to stick it back on.

Well, the Pan starts crying, and he wakes up one of the kids. The girl kid, Wendy. Wendy likes the “bad boys”, and she’s intrigued with this kid who’s come barging into her room in the middle of the night. And instead of calling the police, she offers to sew his shadow back on… which is apparently how you reattach lost shadows.

This song is about the mix of emotions Wendy is feeling as she sews The Pan’s shadow back on. If I wasn’t so modest, I’d say I’m pretty darn proud of the “double entendre” of the lyrics. And the performance by Victoria Levy always melts my heart. If that’s something my heart did.

No, I just have something in my eye.

Wanna see how the music, film and performance all work together? (Well the others do.) Here’s a special video performance of “Dangling by a Thread”. It’s not exactly a house concert, but it’s probably about as close as you’re gonna get in an email. And, bonus… you get to see Victoria performing!

Enjoy. The song, not the making me cry part.

NOW BACK TO THE EMAIL

Happy Year of the Rabbit. About damn time. What’s the deal? It’s once every twelve years? ONCE? The Year of the Snake? Snake’s creep me out. Year of the Goat? Seriously? Goat? That’s all you got?

Welcome to the year of the majestic, kindhearted and brave Rabbit. Enjoy it. Next year is the Year of the Dragon… okay, that’s cool, now let’s get on with it.

I got news about AliƧin (as you must know by now AliƧin is our trippy riff on Alice in Wonderland), and I’m gonna tell you this news, but first…

Did you listen to the song I gave you last week that may or may not make me cry?

It was just a week ago. It was in your inbox. Never mind…

Yeah, the song is sweet and tender and makes you all mushy inside (Not me, but other people), and I asked you to guess what you thought the song was about.

It’s very cool that a bunch of you wrote back to give me your two cents. If I was the kind of guy that expressed my appreciation, I’d say stuff like “Thank you” or “You’re awesome.” You know…. stuff like that.

And I thought they were all pretty solid answers. Except maybe the one about how all the nightclub performers in Las Vegas are really space aliens, and that nothing really happens at a Cirque du Soleil show because they hypnotize you as you walk in, and you actually just sit in an empty theater and think you’ve seen a great show.

What? I didn’t make that up. Okay, I made that up, but your answers where still pretty good.

But… the lyrics don’t tell you the whole story. But never fear, I am here for you and I’m gonna give you the 411 on this song.

Okay… now why did you let me go on so long about alien nightclub performers? You have to admit that explains a lot, and it also means we’ll have to wait until next week to talk about the pissed off Rabbit, the congenial, mischievous and tardy Rabbit Hole and AliƧin’s bus breaking down in the middle of Nowhere on the way to her gig.

No… you have to wait. Don’t beg, it’s not attractive.  That’s it. I’m not gonna get all mushy.

p.s. The website is sensitive and understanding about the need to cry. The Socials are just not in touch with their feelings. 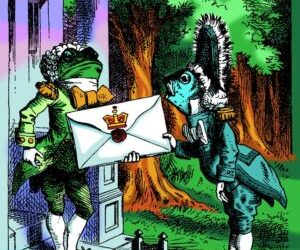 My dear friend Emily writes a beautiful end-of-the-year letter every year. It sums up her journey of the past 12 months. Fun events. Accomplishments big and small, as well as some of the painful moments. It's sweet, poignant and beautiful. You're not gonna get that...