How many (rabbit) holes to fill The Albert Hall? 🐰 🕳

Some people just can not keep a secret.

Take John Lennon. It’s no real secret he was down here a lot. He’s actually why we stopped our frequent flyer program. We were just losing too much money.

John was here, a lot. He and The Hookah Dude were really tight. And, it was like a London fog over there. You couldn’t see a thing. I even think he rented a schroom for a while.

Like The Hookah Dude, John was relentless with the questions, “Who are you? Why is Lucy in the sky with diamonds? How many rabbit holes does it take to fill The Albert Hall?” Relentless.

And there are just so many times you can say, “Because…”. I’ve used my quota. Honestly, I cannot say the word anymore. So, I caved. I did. I admit it. I told him how many rabbit holes it takes to fill The Albert Hall.

But the dude just couldn’t keep it to himself. And it wasn’t like he pulled Ringo aside and said, “Dude, want to know how many holes it takes to fill The Albert Hall?” No. He writes a damn song about it. A Beatles song!

Oy, did the heads roll that day. I barely escaped with the fur on my chinny chin chin, and only because I had friends at the UK Daily Mail. I begged. I pleaded. I gave away two lifetime passes to The Club House, but “Deep Throat” (his name is Ned, but he insists I call him that), finally agreed to plant a story.

He’s a terrible writer and it started off with, “There are 4,000 holes in the road in Blackburn, Lancashire…”.

Boring. Really. It was the most boring story ever written, but it gave me an out. I told everyone that John had read the story (like he’d read the UK Daily Mail), and was “inspired” to write the song.

Lame, I know, but it kept my furry head on my furry neck. 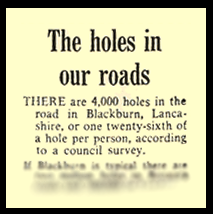 I’ll tell you a secret though. “Deep Throat” (Ned), did give away the real answer in his article when he wrote “There are 4,000 holes in the road in Blackburn, Lancashire, or one twenty-sixth of a hole per person, according to a council survey.”

I mean. Come on, now it’s just simple math. With all values rounded to the nearest whole number of holes, it’s super easy to get the answer.

Some people just can not keep a secret. I mean, what kind of dummy would put that information in a song or write it all down and send it in an email to like a billion people?

Don’t like to read? No problem. Click the video and hear Victoria read to you.
Watch Time 2:45

Dude, are we going to London, and what’s in it for me?
​Where’s the UNSEND button on this thing?

p.s. Mum’s the word with the website. The socials told everyone the Walrus was Paul.

p.p.s. Whenever you’re ready, here are some more cool ways you can play along: