Sleeping on the job 😴🐰 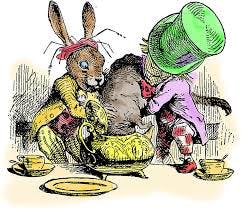 In the version you’ve been told, the Mouse gets a bad rap. “That” story makes the Mouse out to be some kind of dope who comes to a party only to sleep all over everything (and every body).

Dude, the Mouse does more in a day than you or I, (mostly you), do in a week. Like what? Well for starters, he sells real estate. Why do you think they call him The “Door” Mouse (“that” book spells his name wrong too). So during the day he spends his time showing The Dodo yet another property, and… then he does bookkeeping for The Queen. Which you’d think would be a cushy gig, but you’d be wrong. The Queen can be a right “Off with their heads!” B-Word, especially when it comes to filing quarterly estimated taxes, cuz she got dinged with a pretty big fine a while back, and she’s still pissed about it.

And last, but certainly not least, the Mouse has a band. He actually has lots of bands, or just one band, depending how you look at it. His band is always made up of the same players, but.. he changes the name and the style of music they play just about every week.

You think it’s easy coming up with an arrangement of “All the Single Ladies” for a metal band?

So give the Mouse a break. The Mrs. wants to know when The Queen is inviting them over for dinner (never), his kids are, well they’re teenagers, let’s leave it at that. And it’s exhausting trying to quietly scream out “All the Single Ladies” on the ancient upright piano in the basement, before trying to grab a few winks and then do it all again tomorrow.

That’s why he goes to The Tea Party. He’s trying to be a good friend to Hatter and Hare. Because, if he doesn’t go, they’ll usually sit there by themselves. But most of all, he needs the caffeine.

Personally I can’t stand the stuff, but tea is supposed to have more caffeine than a delicious cup of coffee. Yuck.

Don’t like to read? No problem. Click the video and hear Victoria read to you. Watch Time

And Hatter and Hare are actually trying to be good friends. Just before the Mouse falls asleep he’ll whisper, “Dunk” which is a call to action for his two friends to pick him up and stick his head in the tea pot for an extra strong hit of caffeine before sending him on his way.

Yep, the hardest working Mouse in the WonderHood.

Dude, are we making tea, and what’s in it for me?

Hey, you do a little bookkeeping right?

p.s. The website is serving a fine Italian espresso. The socials are reusing the same tea bag.